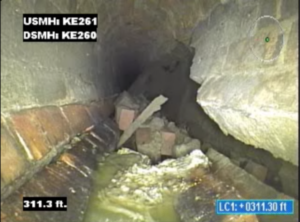 Note: The City of Bangor uses ITpipes in their mobile units, with ESRI GIS mapping integration.

will be. But on Friday, he checked one spot off the list: The line under Penobscot Street near John Bapst High School.

It’s an odd place, too, considering its age. The line was built in 1875, but its bricks shined bright red, almost like new, on one of the two computer screens Linscott’s eyes flicked between. It had no big inward bulges, no large cracks or seams, no cave-ins, and contained no debris.

“This is one of our older sewer lines in town, one of our better ones, actually,” the 32-year-old collection technician said as he sat inside a van on Friday and steered a remote-controlled camera up the underground sewer toward Broadway. “It’s in really good shape.”

Friday was likely a light day for the four-man crew. Assigned with the responsibility of scoping about 10 percent of the 150-mile system annually, the Sewer Department crew often gets called out to emergencies. But when they’re aren’t any, like on Friday, the crew looks for damaged lines that might need repair, or where collapses are likely, City Engineer John Theriault said.

The city aims to fund nearly $63 million in infrastructure projects during the next 15 years to stop raw sewage and contaminated stormwater from spilling into the Penobscot River and Kenduskeag Stream. And that’s just for the jobs it knows about — not the work that arises from emergencies or natural wear-and-tear. Click here to read more…

When it's Friday and you got one last pipe to inspect. #tiktok #water #wastewater pic.twitter.com/dGOF…

Booth 161 is where @itpipesross from @ITpipes and @jhoffman2112 from @EsriWater will be posted up for the Texas Water show! Check out the power that GIS & pipe inspection data has been bringing to #texas water utilities! pic.twitter.com/hyIx…

If you're at the @WisLandInfo Annual Conference at the @OsthoffResort, make sure to bid on the @ITpipes "Office Escape Survival Pack". All money raised go to scholarships for aspiring #gis students. pic.twitter.com/zD2s…

Day 2 of the @WWETTShow! Booth 2966 is where you can learn how you can get Actionable Intelligence from your pipe inspections! Stop by and see @itpipesross @ITpipesJonathan @mjgrabowsk1 pic.twitter.com/n4qn…