The site was the Four Seasons Golf Course in Irving, Texas, and the job would take thousands of feet of hose using conventional methods like a combo unit. 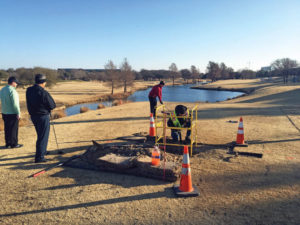 “You’re not bringing anything on the golf course that is much larger than a golf cart,” says Rusty Nezat, owner of Nezat Training and Consulting. “You couldn’t bring any jetters — none of that equipment could be brought out. No pickup trucks — nothing like that could be brought out on the course.”

The project consisted of two separate lines, a clay tile main and an HDPE bypass, both about 5,000 feet. Mineral deposits up to 8 inches were accumulating sediment, restricting flow.

Nezat’s solution was a patented, proprietary piece of equipment called the Jigawon. It is a large-diameter cleaning device that uses existing flow in the pipe to create head pressure and migrate silt and debris downstream. Controlled by a trailer-mounted cable winch, in turn pulled by a small tractor, the device is essentially an inflatable canvas-type holding container with a conical extension ending in a plate on the front, where a series of jets channel about 3,000 gpm at 15 psi.

“It’s a canvas-type material that catches the water and restricts it, and it pushes against the edge of the pipe, so you get a scouring action on the pipe while it’s capturing the water,” he says. “It’s a combination of a kite, a scraper and a sewer ball, which is all old technology. I kind of combined the best of all three and made a new device. It worked really well, and that’s how it was born.”

“It’s very slow because the process is very slow,” Nezat says “It’s a very soft process, so to speak.” 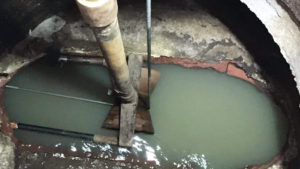 Despite its slow speed, the process is cheap and noninvasive. Nezat’s bid beat out the competition by about $2 million, and because the system uses existing flow, it doesn’t even need a bypass. With this process, Nezat can clean up to 6,000 feet at a time, allowing him to do the 10,000 feet of this job in only two runs, all without putting a single tire mark on the fairways.

A post-cleaning inspection video and condition assessment coded with ITpipes inspection software accompanied the Jigawon process, proof of concept for the device and proof of a job well-done.

According to the director of the golf course, “the project was successful on every level.”  Read the full article here.

Great video highlighting our integration with @lucityinc - @itpipesross will be presenting an education session on best practices for "Esri, Lucity & Pipeline inspection data" at #lucityact19 in 2 weeks - be sure to check it out! itpipes.com/lucity/ pic.twitter.com/L9SL…

Can't wait to be there! twitter.com/lucityin…

We're excited for #WEFTEC19, co-exhibiting with @Esri to showcase maps and itpipes apps! Setup an in-person meetup with @ITpipesCori or @itpipesross here: esri.com/en-us/landi…

Mark your calendars! On July 25th and August 8th we are closing our Tech Support Department from 3:00 to 5:00 P.M. MDT for training. We will be providing the same excellent tech support, to which our clients are accustomed, until 3:00 P.M. on those days.

We are excited to work even closer with Cartograph clients on system management and proactive planning! twitter.com/Cartegra…