Technology upgrades and targeted maintenance have helped Alexander City reduce SSOs by 50 percent over the past two years.

Alexander City is located in central Alabama, midway between Birmingham and Montgomery. The Tallapoosa River runs nearby and feeds Lake Martin, a major resource for recreation and fishing. With 440,000 acres of water and close to 750 miles of shoreline, it looks like a Norwegian fjord. Problems with I&I and SSOs could threaten its water quality, but the city hasn’t let that happen. 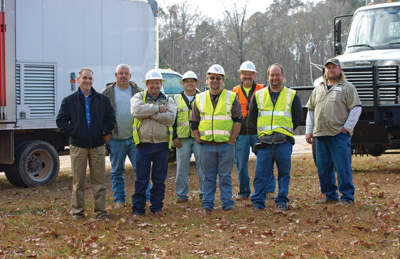 They do get some rain — 58 inches annually. Aging infrastructure, mostly vitrified clay pipe, was creating additional problems with I&I. Excess discharge could make it into the waterways, and ultimately to the lake. Known for exceptional water quality, Lake Martin has been designated a “Treasured Alabama Lake.” The city is committed to preserving this asset.

Gerard Brewer, P.E., and director of Public Works for the Alexander City Sewer Collection Department (ACSCD) notes, “We knew we had potential problems, and both Alabama Department of Environmental Management (ADEM) and EPA were watching closely to see how we handled it.”

ACSCD partnered with CH2M HILL, an environmental consulting firm, back in 2000. According to Scott Cummings, consulting engineer with CH2M, “One of the first things we recommended was a GIS. If you don’t know what you have in the system, you can’t really fix it.” Cummings and CH2M associate Dana Raughton have been onboard at ACSCD advising them every step of the way.

“We’re about 95 percent complete on that GIS now,” says Brewer. “It’s helping us tremendously by prioritizing what needs to be done.”

Previously, smoke testing was the only method used to identify pipe breaks or bad joints. Acquiring a truck-mounted Aries Pathfinder camera system, and Aries pole and push cameras, was another significant step forward. ACSCD has now inspected 40 percent of their pipe using CCTV. ITpipes software (Infrastructure Technologies) handles the data logging. Their plan is to inspect another 20 percent of their pipe each year. 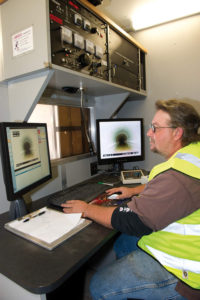 “Until you actually look into those pipes, you have no idea where the problems are coming from,” says Danny Pike, foreman of the SCD and jack-of-all-trades with camera systems. “We knew we had a FOG problem, but until we saw how much had settled into low pipe sections, we didn’t appreciate the extent of the problem. Now we can also see breaks, bad joints and root intrusions.”

“We did have an existing grease ordinance, but it was a single paragraph, said nothing about grease traps, and was kind of vague. We had 50 different interpretations of what it meant,” Brewer says. “Our new ordinance is much more specific — and effective.”

"Bi-directional automated integration". That's our fancy-talk for the process of how pipe inspection data automatically flows from @ITpipes to asset management systems like @Cityworks - AND vice-versa. cityworks.com/our_pa…

On #VeteransDay2021, @ITpipes would like to thank all veterans. We're particularly proud of all the veterans who work for us, including @ITPipesEric, @ITpipesCori, Brian Cox, and Al Rossmeisl. pic.twitter.com/qARY…